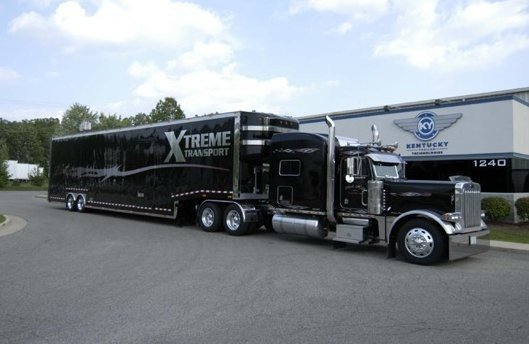 Mark Hoyt loves motorcycles... especially his motorcycle. A weekend warrior bike enthusiast, he was searching for a way to cover the cost of attending Bike Week celebrations around the U.S. His answer: A Kentucky Trailer Specialty Vehicle.

"I started working with a local moving company to customize a van they had on their lot," says Hoyt. "The rep told me that the job was getting over his head and referred me to Tom Harper at Kentucky Trailer." In a Saturday afternoon appointment with Harper, KTSV-MI VP of Sales, Marketing & Business Development and Don Hobbs, Director of Sales and Senior Product Designer, Hoyt toured the manufacturing floor to see Kentucky Trailer's capabilities in custom design. It is what followed the tour that clinched his decision to hire Kentucky Trailer.

Hoyt's initial request was for a liftgate to load two rows of motorcycles. Kentucky Trailer led him through the engineering options, opening his eyes to the potential of his trailer. The transporter included a hydraulic system with three independently controlled decks. Instead of the standard "open center" design, Hoyt opted for edge-to-edge smooth aluminum decking that would allow him to haul both motorcycles and cars. The typical vehicle restraining system was swapped for aircraft tiedowns and rails for hauling versatility. Kentucky Trailer also designed the exterior graphics for the trailer including the Xtreme Transport logo and corporate identity. Hoyt showed the team photos of his newly purchased tractor, and Kentucky Trailer outfitted the trailer to match, including custom wheels.

Since his original purchase in the fall of 2004, Mark Hoyt continues to rely on Kentucky Trailer to tweak his extreme trailer. He now hauls classic cars as well as motorcycles; in fact, Xtreme Transport's largest client is a Corvette Club. As Mark Hoyt's business needs change, Kentucky Trailer makes the necessary modifications. "Once people see what I have for equipment they are like, 'Wow! This is amazing!'" Hoyt says. "I get hauling business because of the investment I made in this trailer."