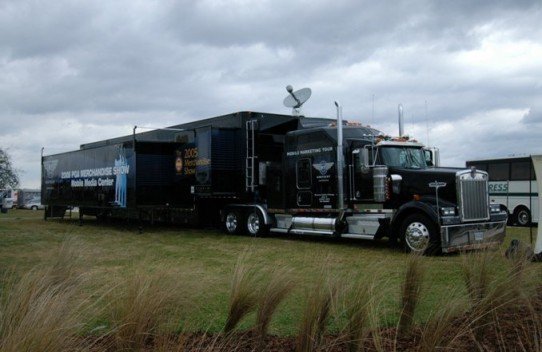 Executives organizing the PGA Merchandise Show were happy to host a new exhibitor at their 2005 show in Orlando, Florida. Kentucky Trailer Technologies registered to bring its 1,000 plus-square-foot National Mobile Marketing Tour trailer to the show.

The event's largest booth immediately caught the attention of PGA show organizers who were looking to make a splash with new exhibits in 2005. Their people called our people. Within minutes, it was obvious that a win-win partnership could be created.

"They wanted to make use of our trailer while it was on the show floor, but weren't sure how," says Tom Harper, Director of Sales and Marketing for Kentucky Trailer Technologies. "We brainstormed and decided that, because of the high-tech capabilities, allowing attending media access would be perfect."
Kentucky Trailer Technologies stripped the trailer of its National Mobile Marketing Tour branding, then rebadged it with a club-swinging golfer, a PGA seal and a Kentucky Trailer logo to make the trailer fit seamlessly into the show's graphic identity. The trailer's new look made such an impact, PGA executives optimized the mobile functionality of the trailer to host media at their pre-show Demo Day at a golf course in Orlando. From written agreement to embarking on the trip to Orlando, Kentucky Trailer Technologies transformed the trailer in just 10 business days. On-site, the interior overhaul was immediate. New furniture and signage complemented the multimedia presentations that the PGA created to personalize the trailer as its own.